By Jamie Bisher
The ringleader of the anthrax scheme in Finland was Baron Otto Carl Robert von Rosen, a native of Solna, Sweden, and a former lieutenant in the Swedish Army.  He excelled as a competitive marksman, and placed eighth among riflemen in the moving target event at the 1908 London Summer Olympics.  Baron von Rosen had lived and worked in Finland since 1912.  He looked like the prototype for a film noir secret agent and saboteur.  His icy blue eyes cast the glimmer of a freedom fighter’s idealism (...or, perhaps, the appetite of a Swedish expansionist?).  High cheekbones, a square jaw, and sharply chiseled nose complemented his aristocratic bearing.  Attired for a photograph in a high white collar, dark tunic and black leather overcoat, Von Rosen evokes a sinister priest.  His thirtieth birthday occurred during the opening year of the First World War, yet his receding hairline added years to his age. 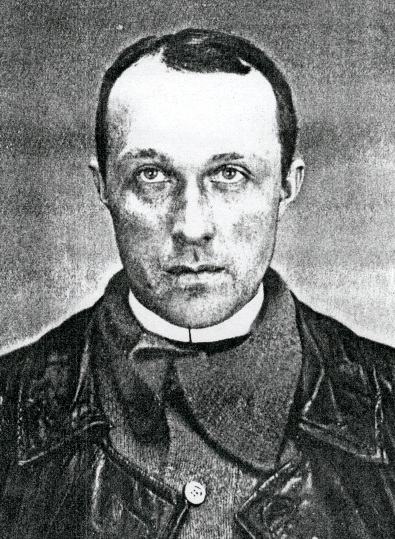 Baron von Rosen
Baron von Rosen recruited three agents to establish secret supply routes to rebels inside Finland and Russia.  Raoul
Graaf and Gustav Halfdan Stärky were experienced Swedish trappers and woodsmen.  Emil Jokela, a Finn, was a product of Ausbildungstruppe Lockstedt.  Initially, the trio's mission was to transport supplies, usually explosives, only as far as the Finnish border where they would rendezvous with rebel units.  Rebels carried the precious cargo deeper into Finland.  To cloak his covert activities, von Rosen established a trading company that required frequent trips between Stockholm, Kristiania (now Oslo), Copenhagen, and Berlin.

The Opdagelsespolitiet, Norway's counterintelligence police, took an interest in Baron von Rosen in 1916.  Although Norway remained staunchly neutral while the Great War engulfed continental Europe, nearly a dozen German spies were expelled for inappropriate activities between 1914 and 1917.  Von Rosen's mediocre trading firm never fared well, despite his frenetic travel.  It seemed that the firm’s main agenda was not commerce.  Norwegian agents picked up clues that the Baron was preparing "some sort of secret expedition with a strange purpose."  Intercepted correspondence termed this expedition "most dangerous" and mentioned "risky transport" of unnamed material from Denmark to Sweden.  Johannes Søhr, chief of the Opdagelsespolitiet, discovered that the expedition involved an accomplice in Norway and a Swedish logistics base, yet the nature of von Rosen's mission remained a mystery.

By this time, von Rosen had broadened his range of activities to include biological and guerrilla warfare.  His modus operandi was to attack and sabotage remote Russian garrisons with a small guerrilla squad to loosen the Tsar's control over the Finnish countryside.  When the squad infiltrated a garrison, it deposited sugar cubes containing tiny vials of anthrax bacilli in feed troughs in the Russians’ stables.  Presumably the horses would ingest the sugar cubes, fall ill, then the soldiers would inevitably come into contact with anthrax spores, and the garrison would be crippled.
The Finnish freedom fighters’ anthrax was provided by the German General Staff.  Germany, the rogue government of the era, employed biological weapons throughout the later years of the First World War:  anthrax and glanders virus in France and Romania, cholera in Italy, typhus in Finland, plague in Russia, and various veterinary diseases in the United States.  It was an imaginative, if not altogether successful, campaign of terror.  For example, in September, 1917, rumors circulated in Buenos Aires that agents of the German Naval Attache had infected Argentina's wheat crops with fungus.  Germany’s agents, proxies, and mercenaries were spreading biological agents on at least three continents in a concerted effort—with the limited technology and strangled communications available to a strictly sanctioned and naval-blockaded nation.
> next section - Nefarious Mission
Powered by